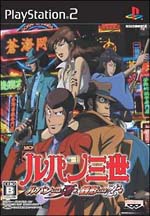 Lupin the Third has his third game released on the PS2; the official site has teased us for months with promising screen shots. Has this latest entry finally delivered a game that captures the spirit of the franchise? I’m only a few “episodes” into it, but I can answer that with an emphatic “yes”. They get a lot right this time, and they even include a very special character I’m sure everyone will love. I’ve posted a picture at the bottom for you to view after you’re done reading. Ah… who are we kidding? You’re going to scroll down and look at the picture; join me at the next paragraph when you are done.

First, the graphics, especially the backgrounds, have really been polished up and given some detail. The first game featured very sparse backgrounds and textures; everything looked flat and boring, a fact you could not avoid due to the endless backtracking in levels. The second game did a better job and added more life to the backgrounds, but there was still a lack of depth and atmosphere. As I move around the back alleys in this game, you see dust blowing through the street and a lot more detail in the textures and backgrounds. It really looks good and sets the right mood and atmosphere. Some of the open areas still look too open and sparse, but there is enough color and detail to blow its predecessors away.

Gameplay retains the simple, intuitive controls from the previous two titles; the ability to change the camera view via the right analog stick has returned and has been significantly improved from the first game. It now has a free range of motion rather than the limited angles the first game provided. As with the two previous games, help dialogs pop up during the game to explain the controls for those who refuse to read the manual. One new feature has been added to Lupin’s repertoire, the “Lupin Action Event”. At certain points in the action, you must push a series of buttons within a certain time limit. Success means you successfully dodge a flying object, drive your Benz up a wall, etc. Failure leaves you knocked out and back at the beginning of the current task.

They have also improved the control system with small touches; one welcome touch is a “quick menu” of items and costumes accessible via the directional pad. Rather than having to dive into a series of sub-menus via the start button, you can quickly switch into a disguise or use an item. Medical kits to restore your health have been replaced by cup noodles, a nod to Tott-san’s personal addiction. You can zoom in and out of your mini-map to see the big picture or a close-up to see if there are any guards near.

Another area overhauled is the disguise/recognition feature; the previous games had you pushing a button to salute or make another gesture to fend off wary glances from the police. This game has the officer walk up to you and ask you a question; a dialog with three choices pops up along with a timer. You have to select the appropriate answer before time expires; answer incorrectly or let the time expire, and the jig is up! You then have to run to a specific area to avoid pursuit. Combat features a combo system that looks neat, but I have yet to figure out if bigger combos affect your rating at the end of the episode (more on ratings later).

Where the first two games were still easily accessible to non-Japanese speakers, this new disguise/recognition system makes this game slightly more difficult to get through. I’m finding myself constantly heading for the hills because I cannot translate a question and one, let alone three, Japanese answers fast enough. It comes down to a guess, and the odds are one in three that you’ll get it right. However, the combat system compensates, as it is fun to whack John Law around now and again.

This game really shines and captures the essence of the franchise in how it progresses through the story. It breaks it into individual “episodes” complete with the typewriter episode title at the beginning and a preview of the next episode at the end. Once you complete the first chapter, you can access a menu of the available episodes and choose which one you want to play. This menu is split into two tracks, one for Lupin’s side of the story and one for Zenigata’s. So far, it appears you can play through the episodes in any order you like. Want to rush through Lupin’s story? Go for it! More interested in seeing Zenigata fall in love? Dive right into it! However, the episode previews do tend to steer you towards a path that will weave the two story lines together.

You can also replay any of the completed episodes at any time; this comes in handy if you are not happy with the ratings you received. Ratings? Yep, when you complete an episode, you are assigned a set of ratings, e.g., how fast you completed the level, how accurate a shot you were, etc. It is the standard letter rating system you see in Japanese games; F is the worst, and S is the best. I love how they have set this game up to be replayable; I have yet to trudge through the first two games unlocked hard modes. However, I can easily see myself returning to this game to play an episode or two in hopes of boosting my ratings. Anything else I manage to unlock is going to be an added bonus to a game I’m already looking forward to replaying once the story is done.

I’m only a few chapters into this game, but I love what they have done. They’ve finally made the Lupin game I’ve been waiting for on the PS2. It isn’t going to win any awards for graphic superiority or intricate gameplay, but it captures the charm, humor, and style that makes the anime something I can pull off the shelf and enjoy at any time. Now go look at the funny picture one more time…

Buy it at NCSX 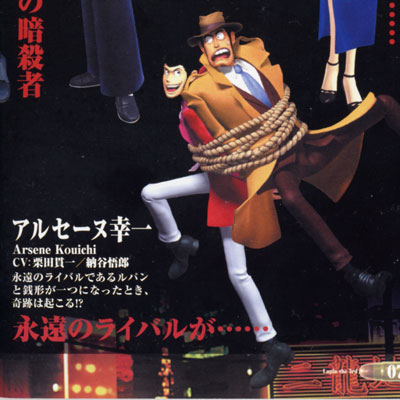 Heheh. I scrolled down for the picture first. You totally called it.

The game sounds awesome -- but I was already pretty charmed watching the clips they had on the website. I don't know if I'll actually be able to purchase it anytime soon, but it's certainly something to keep in mind for importing in the future. Even with a lack of knowledge of Japanese, it's hard to resist the temptation of the Lupin-tied-to-Zenigata character. That's quality entertainment right there.

Thanks for the review!

Yes, all of you are predictable, visual creatures. ;) Not knowing Japanese really doesn't affect things too much; it just makes it slightly annoying to have to continually run from the police because you have no idea what they are asking. The game is still mostly linear and will keep you moving towards the end.