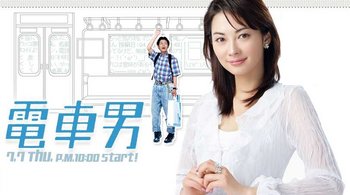 Once again, I am behind the times, but I have finally managed to sit down and watch all eleven episodes of Densha Otoko and the special. This is your standard "nerd grows up and gets the girl" drama but with the twist of being loosely based off actual events. Yamada Tsuyoshi is the stereotypical nerd; he enjoys games, anime, and figures but has no social skills, especially around girls. His life changes in one moment when a drunk begins harassing a cute woman, Aoyama Saori, on the train. He screws the courage up to confront the drunk but ends up feeling like he did nothing.

Saori eventually sends him an expensive thank-you gift, and Tsuyoshi with the help of strangers on a popular internet chat board must find the courage to pursue his first relationship. It is a simple and predictable formula, but the internet aspect provides a unique twist and the true heart of the series.

Densha Otoko cast the perfect leading man in Itoh Atsushi; he had the right look for the part. He is plain enough to be the nervous everyman we can identify with but attractive enough for the audience to believe he could get the girl. We watch his character learn to open up, be more confident, and learn to love who he is. By his side through the whole ordeal are his friends on the internet.

The one area I didn’t understand was why his character remained so whiny up to the end; mostly, Tsuyoshi gains confidence and acts on that confidence, but he then ends up breaking down into tears even while confessing his love to Saori. Perhaps this is something unique to the Japanese culture, but I would have found it more enjoyable to see Tsuyoshi still nervous but more comfortable with who he is and what is happening in his relationship. I can understand having trouble getting out the words "I love you"; it is a big step for anyone to take. Why you would break down in tears though is not something I could relate to.

However, this does little to ruin the experience of watching Tsuyoshi grow as a person. The steps he takes and his nervousness are something everyone experiences on some level with their first relationship. Despite the length of the series, the growth does not feel rushed or unbelievable.

Itoh Misaki made for a very attractive leading lady, but her character was not given the same chance to grow over the eleven episodes. We learn that she has her own issues with trust and relationships, but we do not see her really confront these issues in the same manner Tsuyoshi confronts his. These problems exist for her and provide stumbling blocks in their burgeoning relationship, but they are barely addressed and serve only as convenient plot devices.

It’s all about the connections

The heart of this series is not Saori and Tsuyoshi’s relationship; it is in the friends Tsuyoshi makes on the internet who support him. Rather than making them all fellow otaku, they are a diverse collection of individuals. There are those who enjoy their hobbies a bit too much, but there are also housewives, couples, and other normal people with their own issues. As they attempt to provide their friend "Densha Otoko" with courage, they also learn to find their own courage and move on with their lives.

This is what I enjoyed most about the series; watching these strangers band together to help someone they never met was more heartwarming than watching the nerd break out of his shell. The series connected these individuals not only via the net but physically; they would pass each other on the street or have connections through others they did not realize. It added another layer to the series that rewarded you for paying attention.

I enjoyed this series more than I thought and for reasons I was not expecting. The internet denizens made the show for me; their interactions and messages resonated with me and made the drama feel less like a story and more like something that could, and did, happen in reality. There was plenty of comedy, touching moments, and cute eye candy. This is a drama that can endure; its characters bring warmth and humanity to their roles that an audience can identify with.

Once again, I am behind the times, but I have finally managed to sit down and watch all eleven episodes of Densha Otoko and the special.

Don't feel so bad. I only saw the movie last year. I wrote a review of it at http://www.cityonfire.com/japanese/trainman.html . I hear the show's better, but no one can release it due to the Star Wars copyright stuff. The chick's definitely hotter in this version. I take it you imported the dvd?

I wrote a review of it at http://www.cityonfire.com/japanese/trainman.html

Brother, you have some issues you should work through. :)

I hear the show's better, but no one can release it due to the Star Wars copyright stuff. The chick's definitely hotter in this version.

Not sure if you mean the chick in the film is hotter; most of the comparison reviews I've seen think the lead in the film, Nakatani Miki, pulls off the rich girl look better. I doubt I'll ever check out the film; I've had my fill of the story and don't need to check out every film or manga version.

I take it you imported the dvd?

No, there are local (relatively speaking) sources for my j-drama needs.

I meant the chick in the show’s hotter. The one in the film looks rich, but too old for the guy.