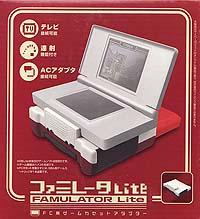 When I first saw this cross the wires, I knew I had to have one; it didn’t matter I only own one Famicom cartridge, the Lupin game, of course. I had to have the Cyber Familator Lite and contacted NCSX to see if they would be getting any in stock. Mine arrived yesterday after the nice folks at NCSX took my $68US via a pre-pre-order. I doubt these will sell out though; prove me wrong gaming masses! Won’t post any pictures here as NCSX already has better pics up than I could snap right now.

Love the packaging for the unit; the box colors are a throwback to the original Famicom console colors, but it also evokes memories of the old Game & Watch units. The box is small, no wasted air or packaging to clutter things up. The unit and AV cable slide out on a plastic tray; small instruction manual and warranty card are behind the tray. Nice to see they included an AV cable; they are cheap, but they could have skimped and left it out.

Sans batteries, the unit is light and matches the old Famicom color scheme. Without a DS Lite attached, it feels comfortable to grip even with my stubby fingers. Four AA batteries are required and are held two apiece in the rounded side grips. There is a noticeable difference in weight once the batteries are in, but it did not prove to be uncomfortable holding it for 30 minutes of gameplay. I’m not surprised by the weight or form factor; pretty much knew the bulk of the unit would come from the batteries and the cartridge.

One odd bit was trying to close the battery covers; it seems the rechargeable batteries I use are a smidge larger than what the housing expects. I only managed to get one cover fully closed; switching to an ordinary AA for the top battery allowed it to close with ease.

Firing up a game

You plug your DS Lite into the Familator via its GBA slot, and your Famicom cartridge goes into the top slot of the Familator. Plugging the cart in for the first time took a bit of gentle pressure; it will likely loosen up over time. Before you can fire up your DS, you must plug a Game Boy Advance cartridge into the bottom of the Familator. Once all the bits are snapped together, you can turn your DS on and select “Play GBA game”. The Familator allows the DS to pick up the initial GBA boot and then inserts itself between the two to send the game data to the screen.

How’s it look and sound?

The game plays on the top screen and looks fairly decent. Without a large library to try, I cannot say if the picture quality varies from game to game. For my game, it is slightly small but not to the point of eye strain. Text is difficult to make out at times, and the overall picture has a bit of grain to it. Played for about twenty minutes without feeling any soreness or tiredness in my eyes.

The built-in speaker is good and can provide loud volumes without becoming tinny. A volume dial allows you to adjust the level of 8-bit goodness blaring out. Haven’t tried the headphone jack yet, but I would be surprised if sound quality diminished.

How do you play?

Gameplay works like the DS was a Famicom controller (control pad, A, B, Start, Select); the X and Y buttons have no discernible function. The shoulder buttons act as secondary versions of A and B with Left allowing a rapid fire feature. During twenty minutes of play, you could feel the bulk and weight of the complete unit slightly, but it felt like I was back playing an original brick Game Boy.

Spent ten minutes checking out the TV hookup; underneath the Famicom slot is the plug for the AV cable and a switch. Just plug in the AV cable to the Familator, then into your TV or receiver, flip the switch on the Familator, and play. You have a complete, one player Famicom in the palms of your hands.

If you plan on staying attached to the TV for any length of time, you might consider picking up an AC adapter for the Familator. The rub here is the connection is non-standard; it looks like a mini-USB port meaning you can’t run down and pick up a generic adapter. I’m sure the good Cyber folks will release their own at some point.

NCSX mentioned that there is some way to control the brightness and contrast on the games you play; have yet to find out how that works. There are no buttons or dials for this on the unit, and my limited Japanese reading ability has yet to pick out anything in the directions. Maybe the X and Y buttons achieve this function, but I’ve pressed them repeatedly without any noticeable change in picture quality.

The reset button comes in handy and is out of the way to prevent accidental pressing. No worries about wiping out your progress mid-game.

Want to bust out that original copy of Final Fantasy 2 and play it while you commute? Own a DS Lite and one GBA game? Then, this is the perfect gadget to pick up and satisfy your 8-bit wanderlust. Don’t own a GBA game? Find a $5 one on eBay; you’ve already shelled out $68US for the unit. What’s a few more to pick up a crappy game you can leave tucked into the Familator.

Let’s face it; this is a novelty device aimed at wacky collectors willing to pay for hand-held, old school portability. It is a nearly complete Famicom clone lacking only the ability to have a friend jump in for two player action. It is light enough even with the batteries and cartridge to play for a significant period of time; you’ll feel the heft, but it is never taxing. Loses a few points for its non-standard AC adapter plug. Overall, I’m pleased that I have a small package that opens up a large catalog of games. Hmm… my eBay usage may be on the rise…

Finally, I can’t recommend NCSX enough if you are looking to pick up this or any import item. I don’t buy many import games, but they are one of the first places I look. They have always been quick to respond to emails and have made me a satisfied customer repeatedly. When I asked them if they would carry the Familator Lite, they said they might and would contact me if they were going to get a shipment. They did and even set one aside for me if I still wanted to pick it up. They are a pleasure to deal with.

I have a question:

Thanks for reading my blog; you would need a 72-60 pin adapter to plug a US NES game into the Familator. Did a quick Google and found a company called Yobo Gameware (http://www.yobogroup.com/) that sells one. I suspect you could pick up a 72-60 adapter from a shop like Radio Shack and have it work, but I don't have any first hand experience to say for sure.

I did at least see if the NES cartridge would be able to slide into the Familator. It can, but there isn't much room to spare. Shouldn't be an issue though as the adapter would fit within the confines of the NES cart rather than being wider.

Thanks again for stopping by.