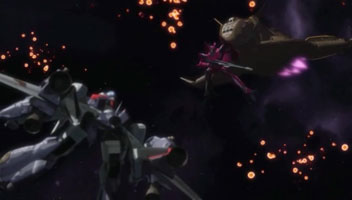 Ranka attack! The thrust of this episode is the government’s experiment to see if Ranka can produce a "Minmay attack" of her own against the Vajra. They send her out to sing her special song and see if it can cause confusion among the Vajra. Her song seems to contain mini fold waves, and they do indeed disrupt the Vajra’s mental processes. Grace, however, feels the numbers behind Ranka’s power could be higher.

Sheryl grows more jealous of Ranka’s popularity and now prominent position as the savior of the fleet. Alto is now entangled in Richard Bilrer’s, head of the SMS, plan to unite the universe through the power of fold quartz. You might recognize fold quartz as the material Sheryl’s earring is made from, the same earring that allowed Alto to hear Sheryl and Ranka’s song across the galaxy.

Not much to say about this episode; the story is building up the tension once again showing that the trio of Leon, Grace, and Brera are cultivating much influence over the government. It was a great mix of action, plot and story development. We have more pieces of the puzzle, but we are still tantalizing far from seeing the whole picture. With only one mediocre episode so far, Macross Frontier is shaping up to be the best series of the year.