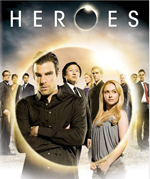 Ah… Heroes… When you first told the world in 2006 "Save the Cheerleader; save the world", I did not start watching you despite intriguing previews. My enthusiasm for sci-fi on television had been dashed on the rocks twice in recent memory by Lost and Battlestar Galactica. I decided to wait and see if you generated enough buzz and ratings to win a second season. Well, you did, and I did something most unusual. I purchased your first season on DVD, sight unseen.

It was a gamble, but one that paid off. Your first season captivated my wife and I; episode after episode was watched in rapid succession. You drew us in with good writing and characters that added a fresh perspective on time worn comic book tropes. And you left us with a classic cliffhanger eager for the next season to start. The second season was derailed by a writer’s strike, but it was clear that something was changing in the series and not for the better. With the close of the fourth season, it has come time to bid you a sad adieu.

You’ve made no massive mistakes to drive me away, but many small, irritating details have piled up to form a barrier that prevents me from simply sitting back and enjoying the story as I did with the first season. Why have I managed to hang in so long then? Good question… There were small glimpses of hope along the way. Despite saving the cheerleader and the world, elements from that dark future kept cropping up – specials being rounded up by the government, Sylar as Nathan, etc. It was intrigued to see if you would expand on the possibility that the future may not be as mutable as believed. You may alter how you arrive at a conclusion, but that conclusion is unavoidable.

There were also other plot lines along the way that help promise, but inevitably, they would simply end with a wholly unsatisfying resolution. Sylar meeting his father and dragging a kid along… Meeting Peter’s supposedly dead father… These and countless other threads had me believing that good storytelling had returned only to see them trail off into lackluster endings. So much build up for so little payoff.

Also, I was increasingly put off by how the characters started to act against the personalities built up over time. This last season was particularly egregious in this area. Case in point was Noah Bennet and his use of the Haitian. Noah only seemed able to use the Haitian to bully or protect college girls. The one time he could have really put the Haitian’s ability to use, he seemed to not even consider it. He isolates Samuel from those that could come to his aid; this is the perfect time to have the Haitian nullify Samuel’s powers to tag and bag him permanently. Let’s not even start on Peter deciding to take a plane ride instead of teleporting a healer directly to a dying Hiro.

This leads me to another annoying point from this season, playing fast and loose with the powers. Peter took the brunt of this; his power wavered between a reflex action and a conscious decision to use it. It behaved more as a MacGuffin to move the plot along. The final episode completely and conveniently forgot about the use of Samuel’s power through the entire season. He could be well away from his followers and still level buildings; however, Hiro transports all but three specials away, and Samuel couldn’t even make a pebble move. It makes no sense.

With the writing so uneven, the final element that pushed me away was turning Sylar into a hero with no new, compelling villain in the wings. Some of the best dialogue and story was written around this character; he was deliciously evil, the villain we love to hate. You want to redeem his character? Fine, but don’t leave a power vacuum in his wake; the season’s cliffhanger is Claire showing the world specials exist. Big deal… This may return the story back to the dark, inevitable future, but it simply isn’t compelling enough for me to continue watching. You were such a good show out of the gate, one that gave me hope that good sci-fi writing was back on the television landscape. Maybe when your final curtain is drawn, I’ll revisit the seasons I’ve missed and see if you reclaimed your initial brilliance. Maybe…