While I did not spend as much time as I have in the past, this year’s Anime Boston proved to be my personal favorite simply because of the two Japanese guests. The flip side is though that it reminded me just how old/out of touch I am with today’s anime generation.

I did not pre-register for AB this year, a mistake I would somewhat rue. There was nothing I really wanted to see or do on Friday, so I decided to head in on Saturday and pick up a one day badge. Didn’t quite get the start I wanted in the morning and knew I was going to miss a bit of the anime music video showing at 10AM.

When I finally arrived at the Sheraton and found the registration line, I knew there was no way in Hades I was going to make any of the AMV showing. The line wrapped around inside a room, out the door and around a good portion of the hallway. Ended up spending ninety minutes just to fork over my $30.

Wasn’t impressed with the badge this year; it was a basic black and white photo and lacked the charm of previous badges. At first, I thought they simply might have saved the fancy color ones for pre-registered attendees, but I never saw a badge with color. Personally, I think this is due to the anime industry being in the low end of the selling cycle at the moment. The corporate sponsorship is probably not as strong forcing some cutbacks. Or, it could be the sheer scale of trying to cut color badges for all the attendees proved to be unworkable.

After getting my badge at noon, I headed off for my first activity of the day – getting Shuzilow HA’s signature. Shuzilow is most recently know for his directorial work on Solty Rei but has done character designs for games like Parodius, anime (Planetes, etc.), as well as written manga and much more.

With people likely to bring more recent items like Planetes, I had hoped to surprise him by having him sign my copy of Sexy Parodius. He was surprised for sure, but unfortunately, I was not the one to do it. As I waited in line, I spotted someone ahead of me with the same item! When he arrived at the table, I heard Shuzilow give him the expression I was hoping to get. He was still gracious and a bit impressed when I presented my copy, but the “wow, you’re a fan!” mystique had left him at that point.

After that, I wasn’t sure what to do; there wasn’t much on the schedule that interested me. Most of the panels I wanted to see were later in the day, and most of the anime being shown was dubbed or something I could easily catch on TV or rent. But, my stomach was growling and made the decision for me. Off to the food court!

After grabbing a bite, I headed to the end of the ADV panel and didn’t pick up any news there. Was at the Q&A portion of the panel, but I don’t think they announced anything major from what I have seen. Once they were done, I filed out of the room and got back in line for the room to wait for the next panel to start. This was the one panel I really wanted to see this year – the panel featuring Shuzilow HA and Shimamoto Sumi.

Chatted with a nice lady while in line about both of their works and finally took my seat inside. Both of them were ready and waiting for their first round of questions from US anime fans. 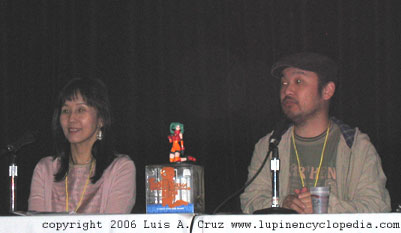 Both guests were into the whole panel scene and had a lot of fun with each other and the audience. It was great to see the two Japanese guests of honor really enjoying being with the fans and learning just how much their work is appreciated outside their own country.

Shimamoto really stole the show though; she still looks very cute and knows how to work a crowd. For those unfamiliar with her, she made her voice acting debut as Clarice in Castle of Cagliostro. She went on to be Nausicaa in the film of the same name along with countless other familiar voices.

She is an avid PS2 Final Fantasy player though she admits that the on-line aspect, and technology in general, is not her strong suite. FFIX is her favorite, and she just finished FFXII a few weeks ago. If you have seen the picture of her on the AB web site, she hasn’t changed much from that.

One insight into working with Miyazaki was that he is very concerned with details not in the script. So, the voice talent may be thinking one thing as they read it in the script, but after the first read through, Miyazaki tells them that they should be thinking differently. She said that can make it a bit difficult at times,but she overall loves working with him.

Shuzilow showed a bit of Solty Rei and fielded the usual questions about how he got into the business, how he works, etc. At one point, he admitted that he wanted to be a comedian when he was a kid, and the audience readily agreed that he could do it any time he wanted. His answers were insightful and laced with humor pulling a laugh, and not a forced one, out of the audience each time.

This is why I went to Anime Boston this year; I don’t really care much for sitting in on panels featuring dub actors. They can be equally as funny and charming, but I want my convention experience to be closer to the source and brush elbows so to speak with the people who give dub actors the ability to pay their rent.

Small digression… skip over this next paragraph if you do not want to get back to the con info. This is one of the reasons why I feel that I have little in common with today’s anime generation. They are growing up watching anime dubbed on TV much as I did. However, the larger difference I see is that a large part of them worship the dub actors and could care less about the original Japanese talent. What bothers me most is that most of these fans will likely never broaden their horizons. Unless it is dubbed and possibly dubbed only by their favorites, they will likely pass over great titles. I’m getting too old and cranky I reckon…

Back to the con… Had some time to kill before Shimamoto’s autograph session, so I headed into the video game room briefly and then into the dealer’s room. Again, I’m too old… most of the merchandise there was aimed at the Naruto set. Naruto here, Naruto there, Naruto everywhere… A few pieces here and there caught my eye, but they were items I could obtain cheaper on eBay. This marks the first AB that I haven’t forked over some money to one of the dealers; I left the room minutes before it closed and headed off to the autograph session.

Got in line and was eagerly awaiting having Shimamoto sign my Cagliostro theatrical program. While in line, I marveled at some of the items people had brought for her to sign – framed cels, old posters, and other items that you know cost them a lot of money to obtain. This is the line I belonged in; people who were not only passionate about the current state of anime but also passionate about its history. When the line finally moved me into the autograph room, they told us that we could have two items signed (curses… if only I had brought my “Albatross” color manga as well) along with taking one picture with her.

The girl behind me didn’t know we would be able to take pictures, so she asked me if I could take one for her and email it to her. But of course! We chatted a bit and finally got our items signed. Shimamoto was very gracious with every one that came; she shook hands with everyone before they left the table. I left with a signed piece of Lupin history and the lasting memory of having personally met someone involved with it. 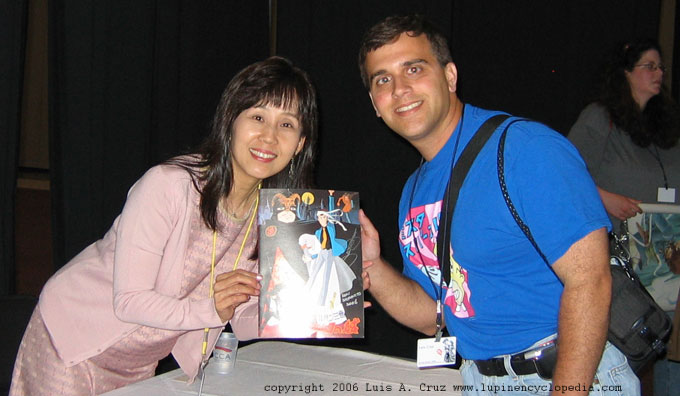 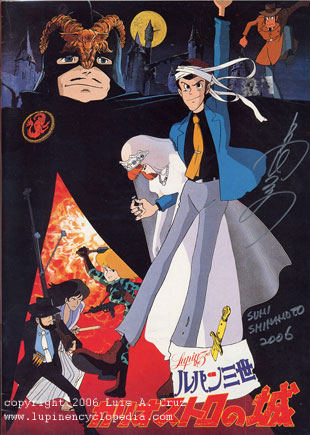 The rest of my night was spent in the AnimeOnDVD.com panel and the Funimation panel. With nothing left on the schedule I cared about, I headed home content knowing that despite having no luck in the dealer’s room, my $30 was well spent rubbing elbows and getting autographs from two greats in the anime industry.