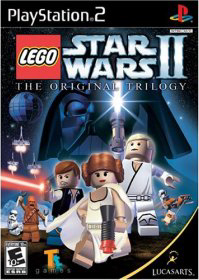 Yesterday was a glorious day, one I had been waiting on for months. Lego Star Wars II: The Original Trilogy was released. When the first Lego Star Wars game came out, I played the demo, found it to be cute, but did not consider picking it up. It seemed geared more to the younger set. This is true to a certain extent, but after watching my niece and nephew play it, I realized it shared the same qualities that make Pixar films enjoyable for kids and adults.

I picked it up for the PS2, and my wife and I played it constantly until we unlocked and found everything. The game is just pure fun, the sort the old arcade games of yore provided. It also had a quirky sense of humor that worked on many levels. Having played through the first two stages of the sequel last night, I am overjoyed that it keeps all the elements that made the first game fun and adds just the right amount of new touches to keep it from feeling like more of the same. There are even more hidden items to find this time, so the wife and I will be playing this for quite awhile.

Yesterday also saw the release of the original trilogy on DVD. Yes, Lucas finally came to his senses and realized that people wanted to fork over money for the non-enhanced, Han shoots first version of his films. While they did not spend any time or energy polishing up the video and audio for the original versions, it is great to finally have both editions on DVD and be able to choose which version I want to watch.

Han shot first, Mr. Lucas; this is nothing to be ashamed of. Maybe someday you’ll realize this.