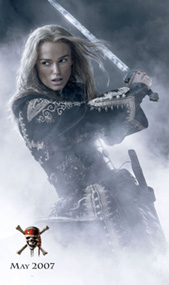 The world’s still the same; there’s just less in it. – Captain Jack Sparrow

Dead Man’s Chest left me with mixed feelings. It was not as tight a film as Curse of the Black Pearl, but this could be excused as it was meant to serve as the first of a two act story. After eagerly awaiting the final act At World’s End for a year, I came out of the theater this week with a grin and a hearty "Yar!". Spoilers ahoy!

Yar… Not everything floats…

World’s End did have its flaws most notably with the Calypso plot line. Calypso was a sea goddess captured and bound to human form; predictably, she was the woman Davey Jones loved and betrayed. While it was an obvious setup, it tied into the story well and provided some sympathy for Jones’ character along with foreshadowing the ending. However, the plot line went nowhere and added a number of distracting and baffling scenes.

After all the lost love and betrayal between the pair, Calypso learns that Jones betrayed her to those that bound her; when she is finally freed from her bonds, she turns into the 50-foot woman and then into a mound of crabs. Certainly a visually stunning scene, but all she does after that is create a maelstrom. There is no grand revenge against her captors, no punishment or reconciliation for Jones. Her story ends abruptly as it began.

Even more baffling are Barbossa and Ragetti’s behavior around Calypso; Barbossa clearly wants something from Calypso, but what? Love? Sex? Her help when she is free? The notion is inserted into the story but again has no resolution. It feels added on to provide a moment of tension between the pair. And why exactly is Ragetti able to speak to Calypso as a lover would? Did he love her? Was he remembering a past love? The writers missed an opportunity to provide a tiny glimpse into the character’s background and make that moment more meaningful.

Aye, but it be damn good fun!

Calypso’s story was my only major gripe with the film; otherwise, the nearly three hour movie sailed by quickly. Where Dead Man’s Chest seemed to stretch for every joke, World’s End provided plenty of comedy that did not feel forced into the scene. The action and effects were superb and had me glued to the screen. The script was tight and well-paced keeping the audience out of the doldrums.

The story and its resolution were predictable but satisfying; there were a number of ways the writers could have copped out and given us a happy but clichéd ending. Instead, we are treated to a bittersweet ending to tie things up. The first film will remain my favorite; it was well-written, tight, and hit all the right strides in its action and comedy. At World’s End comes in a close second as it brought a long story to a satisfying and entertaining conclusion.