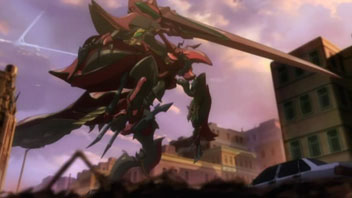 I was overjoyed when I first heard a new Macross series was being produced for the 25th anniversary of the franchise. While most people did not care for _Macross Zero, the 20th anniversary outing, I enjoyed it for what it was and was salivating at the thought of the franchise continuing further. The release of the pilot episode, or "Deculture Edition" as I’ve seen others call it (officially?), did nothing to dampen my enthusiasm. Now, the series is airing in Japan, including a different version of the pilot, and I’m loving every minute.

The year is 2059, and both humanity and the Zentradi are migrating together throughout the universe in giant colonization fleets. One such colony ship is home to Saotome Alto whose long hair and soft features have earned him the nickname "Princess" by his friends. He is in pilot school and longs for the freedom of a truly open and limitless sky. Sheryl Nome, the hottest idol going, has also arrived on the ship preparing for her sold-out concert performance. While preparing for an aerial performance at Sherly’s concert, Ranka Lee, a perky but clumsy waitress, stumbles into Alto’s life. Alto helps her find her way to the concert hall, but no one realizes the grave danger they will soon face.

Scout teams have encountered the Vajra, a mysterious and deadly race of biomechanical creatures. The Vajra forces make their way towards the fleet and penetrate the atmosphere of the main ship. Alto finds himself in the thick of battle and spots the Vajra preparing to crush poor Ranka. Alto hops into a downed variable fighter and unleashes a torrent of bullets at the Vajra.

I was captivated from the start by the intense action and pacing of the battles; some have criticized the use of CG in this series. While I did find it a bit obvious at times, the effects blended well and did not detract from the amazing, fast-paced battle sequences. Alto has all the stereotypical attributes for a protagonist; he is young, reckless, hothead, but fearless when he or his friends are threatened. We only get hints in the pilot version of why is becoming a pilot or is called "Princess". But it does cement Alto’s feelings of confinement; something in his life has caused him to yearn for freedom he can’t seem to find.

The pilot’s focus is squarely on Alto’s development leaving the two women of the series thinly developed initially. All we learn about Sheryl is her popularity; Ranka seems to be an enthusiastic but klutzy waitress. However, the proper first episode fleshes out Sheryl into a popular pop idol on stage but a petulant diva backstage. Little else is revealed about Ranka still.

Alto’s past is delved into a bit more; we learn that he is the son of a, if not the most, famous Kabuki performer. At one point, Alto was being groomed as the successor for his father’s place on stage; thus, he was frequently playing the female lead in performances, hence the "Princess" nickname. No reason is given, but Alto rebelled against his father, left the stage, and has been ostracized from his family since. Part of his thirst for freedom comes from wanting to escape the pressure and confinement of his father’s grip and wishes. But what does he truly seek in life?

Finally, we learn that the existence of the Vajra has been known by the government, and their attacks eventually expected. However, it is a non-military group known as the SMS that have the variable fighter technology and experience needed to combat the threat. The mystery behind the Vajra existence appears to be one of the main focuses for the series’ plot. Enhancing the beautiful animation and amazing battle sequences is the music from Kanno Yoko. I’m more of a fan for her jazz fusion works (e.g., every Cowboy Bebop soundtrack), but she always manages to create pop songs that don’t grow stale over time.

So far, the spirit of the franchise has been captured in this pilot and first episode; we have our epic struggle for humanity, our beautiful pop idol, another soon-to-be important female lead, and the dashing young protagonist they will likely fight over. It has been awhile since a series has excited me this much; the first Macross series remains as one of my all-time favorites, a masterpiece of action and poignant drama. Can Frontier come close to this very high bar? I’m eager to find out.

I was captivated from the start by the intense action and pacing of the battles; some have criticized the use of CG in this series. While I did find it a bit obvious at times, the effects blended well and did not detract from the amazing, fast-paced battle sequences.

Macross Plus used CG, so I don't see why this one should be any different.

It has been awhile since a series has excited me this much; the first Macross series remains as one of my all-time favorites, a masterpiece of action and poignant drama. Can Frontier come close to this very high bar? I'm eager to find out.