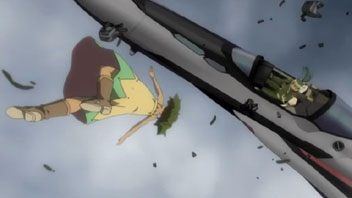 The battle with the Vajra rumbles on inside the colony, and Alto shows he has some raw talent for flying. Despite the heat of battle, Alto manages to keep Ranka safe in an exciting chase sequence that features a fantastic homage to the first series in reverse. If you’ve ever seen the first Macross, you’ll instantly know the scene when it appears.

The remainder of the episode introduces the other players on the stage; Alto’s friends Michael and Luca are pilots for the SMS and are respectively the top sniper and tech wizard for the group. Ranka’s older brother Ozma is the leader of the SMS squadron but lies to Ranka and says he works behind a desk. The government seems to know quite a bit about the Vajra, especially the cold, ambitious Leon. Others are introduced and woven into the plot in different ways.

The episode ends with Sheryl realizing her favorite earring went missing when Alto was flying her around during the concert. She sets out alone and incognito to find him but runs into Ranka. Ranka gushes about Sheryl’s performance, and Sheryl prods Ranka to show off her voice. Ranka shows some talent, and Sheryl joins in causing Ranka to be quite surprised. Cue that moment for a Vajra to attack and for Alto to come out of SMS HQ to find both of the women.

Another brilliantly paced episode kept me on the edge of my seat; the end result left Alto as a promising pilot but showed his humanity as the scale of the destruction and what he went through caused him to empty his stomach. Ozma strongly refuses Alto’s brazen request to pilot a Valkyrie, another nice touch by the writers. They aren’t rushing him into the conquering hero role too soon. He has to earn his place and the SMS team’s respect.

So far, Frontier is turning out to be a fun ride; it has plenty of action and is building an interesting plot. How does the government know about this threat, and how much do they know? I haven’t quite fallen instantly in love with the characters as I did with the original series. However, I am not finding any of them to be annoying or flat stereotypes. Still too early to tell if this will change over time, but it looks like the franchise is in good hands.