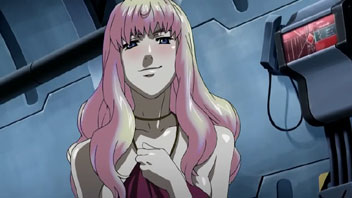 The latest Vajra attack on the colony strands Alto, Ranka, and Sheryl in an emergency shelter. This episode introduces the humorous side of the series and will likely become a bone of contention among fans. While the battle rages, the likely love triangle learns a bit more about each other’s personalities. Some might find the comedy derivative, seen in many shows from recent times. This may be true, but I am finding that it manages to work in context of this series. They are going for some cheap gags at times, but it never stifles the story and manages to elicit at least a chuckle.

What happens after the battle is the meat of this story; when Ozma is wounded in battle, Ranka finally learns of his deception and has a traumatic outburst that sends her to the hospital as well. As Ozma recovers, he tells Alto that she lost her real family eleven years ago to a Vajra attack. She now suffers from dissociative amnesia, and Ozma adopted her and hid the truth to protect her. We close with Alto being accepted into the SMS squadron, and Ranka trying out for the Miss Macross contest.

So, we have another layer of mystery added with only three episodes in the can. And it appears that a new Minmay coming soon, but is there room on the stage for Ranka and Sheryl? Still early in the series, but I’ve yet to be disappointed on any level. I will be keeping a close eye on the comedy though; it is a fine line between gratuitous comedy and comedy that works within the context of the story and characters. The original series knew when to pick its comedic moments, and Frontier is showing signs it knows its that side of the line to stay on.