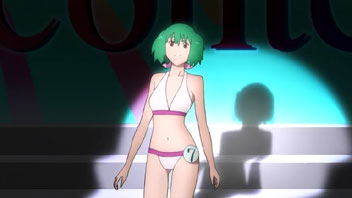 Alto trains with the SMS and tries to earn their respect as a pilot. Meanwhile, Ranka is trying her best to win the Miss Macross contest. Unlike Minmay, she does not win right out of the gate but shows promise. The writers and animators went for another nod to the original series, as Ranka sings “My Boyfriend is a pilot”. As she sings, they flip between her performance and Alto’s performance on a training mission. They cheekily went for a visual gag to correspond with the song’s theme.

Nothing major happens this episode other than introducing us to more of the members of the SMS, including the feisty Zentradi Captain Klein Klan. It was a good balance of action and slow character growth. aving Ranka lose was a welcome surprise; they aren’t simply rehashing the Minmay character. Ranka has her own unique story to tell, and it treads down a different path.

There are signs that the comedy may be slipping into the banal though; Klein has an issue with the micronization process. It skews her too young, and she tends to act the age she looks. Throw in some SD/squishy looking characters, and there is cause for concern. Still, Frontier hasn’t totally abandoned all reason yet; the story and the characters have grabbed my attention and have yet to let go.