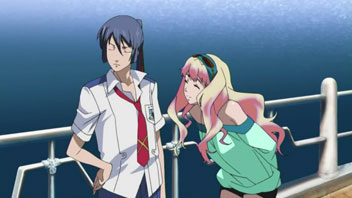 Furious at her entry into the Miss Macross contest, Ozma manages to really piss Ranka off; she storms off and goes on walkabout until she bumps into Michel Blanc. On the other side of town, Alto has tripped over Sheryl once again and is pressed into looking for her missing earring. When he can’t contact the person who might have it, she gang presses him into playing tour guide.

The two story lines converge at the end in the middle of a Zentradi shopping mall. While Ranka finds her voice, she also finds Sheryl continuing to insinuate herself into Alto’s life. There is little action in this episode; the focus is on developing the characters and their relationships. What impresses me most are the minute moments, the brief expressions or statements that hint at larger meanings.

For a fleeting moment, one could see a flicker of jealousy or something even deeper on Sheryl’s face while watching Ranka’s mall performance. These are the moments you watch, remember, and hope they pay off later. What really worked for me this episode was the development of Alto and Sheryl’s friendship. It is easy to see the attraction Sheryl has for Alto; she has finally met a kindred spirit, someone who knows the pressures and demands of the stage. But it is Alto’s refusal to treat her as the pop idol everyone else does that keeps her close. Plus, it is incredibly easy to get a good rise out of him.

As he shows her around, Alto sees a lot of his past life in her; she simply wants to have something of her own, something that isn’t about schedules, press, and publicity. She may have the world at her fingertips, but it is always just out of reach for her own enjoyment. While she can be petulant and demanding, you can see that he empathizes with her situation.

There is a small reveal about the nature of the Vajra in the form of a live sample held by the military. Once again, we see that the Vajra seem to be drawn to Ranka’s singing. Mysteries, mysteries… Just loved this episode from start to finish; the visuals, especially the Zentradi mall, made for good eye candy. The humor was kept at appropriate levels and didn’t stray into genre bending territory. Is it too much to ask for the someone manage to sort out the licensing issues and bring this to the US?