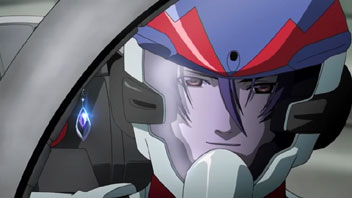 A large scale attack by the Vajra has the Galaxy struggling for survival, and the President of Frontier has finally let the general populace in on the dire situation. The entire SMS team has been assembled under "Exception Clause B", basically a no retreat, no surrender order. But the fight will not be joined by Valkyries alone; the SMS possess the Quarter, a smaller(?) version of the original SDF-1 Macross.

While the episode is mostly setup for the next episode’s battle, there were some great character moments sprinkled throughout. Ranka may have tentative approval from her brother to pursue a career in music, but she is still brooding over Alto and Sheryl’s "date" at the mall. Alto does little to help matters by lying to her when she asks if he was alone at the mall. The fleeting look of pain that flashes across her face spoke volumes about her feelings.

Before heading off to battle, Alto attempts to return Sheryl’s earring and manages to get Sheryl to open up her true feelings a bit. Again, it is the subtle moments that captivate – a blush here, a shy glance there, all topped off with just the appropriate amount of dialogue to deepen and complicate relationships. Keeps me wanting more now…