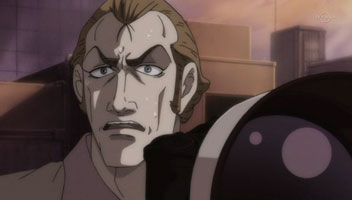 Victor Lance is one of the top tabloid photographers; however, he knows his skills are declining. He decides it is time to get of the game while most believe he is still the top dog. His editor gives him one final challenge that might let him go out with an unbeatable achievement. Shoot a photo of Golgo 13 shooting his gun! Lance’s ego gets the best of him and becomes obsessed with the task.

If you’ve been following the series at all, you can expect the usual round of “I know where Golgo 13 will shoot from” followed quickly by “WTF?! I never expected him to shoot from there” from our reporter protagonist. Two things made the episode interesting; first was Lance’s obsession and final realization that he was in over his head. Few people have actually been able to suppress their ego and realize their are outmatched.

Second was the way luck, good and bad, factored into Duke and Lance’s results. Have to take off points though for the attempted ambiguous “fade to black and then hear a gunshot” ending. Bit too cliched especially given Duke’s less than merciful nature. Not a bad episode especially if you like the occasional of gratuitous nudity.