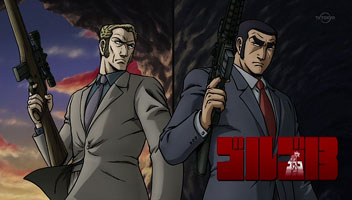 When the CIA is discovered to be stockpiling an incurable poison, Golgo 13 is hired to eliminate all evidence the factory and poison ever existed. The Russian’s hire their own professional code-named AX3 to do the same job. When the two meet, AX3 sees no reason to hinder each other and suggests they team up. If AX3’s employers were only so reasonable…

This episode quickly became my favorite of the series. The story is still a touch predictable, but it manages to do something new, something fresh with Duke and his mission. It may be tough at first to suspend your disbelief; Duke poses as a chemist to get close to the poison factory. Now, I’m not sure how anyone could believe he is a chemist in search of a job; how many chemists do you know that sport tightly packed muscle from head to toe? Or a chemist whose glare is akin to staring into an endless abyss? This is the one major flaw I have with the story; why not make his cover a potential buyer for the poison?

Fortunately, he does not have to hold this cover long, and we move right into the two professionals discovering that someone else is working the same job. We are finally treated to a professional whose common sense overrides his ego; AX3 doesn’t know Duke on sight, and he doesn’t want to know who this other pro is. He simply sees Duke as another tool to aid in his mission. Duke never implicitly answers AX3’s call to join arms, but you can see the same sentiment in his demeanor. I won’t treat you as a threat until you threaten me.

While they are similar in some respects, the interplay between them shows just how different Duke is from all of humanity. Duke exhibits no ego, no emotion; his whole existence seems to be dedicated to absorbing every detail of his current situation and coming up with solutions to get the job done. This was one of the few times that a Golgo 13 story has kept me glued to the screen for its entirety.

They manage to toss in a few other amusing twists; my particular favorite is seeing a woman finally complain about Duke’s lovemaking. Normally, women are gyrating wildly on top of him and then breathlessly praising him as a lover like no other. This woman complains that he didn’t climb on top; Duke may not have cared, but I got a good chuckle out of this. She also provides one of those head smacking revelations; she also complains that the guy the night before, AX3, did the same thing. Of course! Duke and other assassins are never on top because it leaves them vulnerable. Sometimes, it just takes a simple snatch of dialogue to point out the obvious.

I’m not expecting many more of episodes like this, but I hope there are a few more before the season is up. There are ways to deviate from the standard Golgo 13 formula, and this episode proves those deviations can be very entertaining. Definitely an episode you don’t want to miss.

In the manga from Viz, it’s a drug factory.

I agree, terrific episode. One of the few times Golgo has someone he can almost call a rival. <p>…almost.</p>