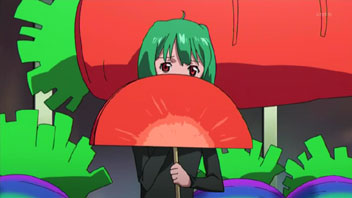 Ranka has a job! Unfortunately, her job is to shill for very large, colorful carrots. But, it is a gig, and there is a variety show appearance coming up. More importantly, she has been accepted into the same school Alto attends. Sheryl intrudes upon Ranka’s life once again though; she pays the school a visit and promptly turns the place into a circus of chaos.

The series finally crosses the line and plays this episode out mostly with cheap laughs and gags. A panty chase takes up most of the episode when a strange creature makes off with Sheryl’s knickers. Everyone in the school is after that tiny piece of fabric. Alto finally plays Prince(ss) Charming and takes Sheryl on a flight around the town. Some decent fan service is thrown in for good measure. Sheryl, Ranka, and Nana share a shower, and we get more hints that Nana’s feelings for Ranka may be more than platonic.

However, they do manage to wedge in some brilliant character moments between the slapstick. Ranka’s appearance gets bumped so Sheryl can perform; as the bad news washes over her, all she can see is Sheryl’s image around her – billboards, signs, etc. She says nothing, and we don’t even see her face. Yet, you can feel her disappointment and discouragement that she may never come out of Sheryl’s shadow, personally or professionally.

As the episode draws to a close, Ranka encounters the mysterious pilot of the Red Baron, who in true mysterious fashion plays his harmonica and stares blankly. Oh, and Sheryl signs up at Alto’s school in the pilot program. If not for the brief Ranka segment, this episode would have been completely disposable. The next episode looks promising, and I hope it crosses back into the territory that has made Frontier worth watching.