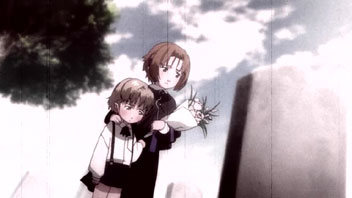 Frontier thankfully returns to some form of drama and action after a mediocre turn at slap stick comedy. This episode aims in (pun intended) on the SMS’ super sniper, Mikhail. During a sortie, Alto and Mikhail are arguing fiercely leading to a nearly fatal mistake on Mikhail’s part. Tensions flare, but Alto learns a great deal about why Mikhail has taken the path of the sniper.

The series introduces another plot wrinkle as it appears Sheryl’s manager was electronically peeping in on a high level strategy meeting about the Vajra. Do I sense a heartbreaking betrayal for Sheryl in the future? I’ll go on record and say "yes". And the Red Baron appears in front of Ranka yet again; what is his fascination with her? The Baron appears out in space soon after to prevent the SMS from discovering a Vajra hatching ground. Where he appeared to be working with the Vajra previously, his mysterious orders from a disembodied voice deepens the mystery.

Was a decent episode all around though it didn’t do much to endear me more to Mikhail’s character. Did enjoy the new wrinkles to the plot; not sure how this will play out. I love that feeling. As long as they don’t stray too often back into the slapstick, I’m in this wholeheartedly for the long run.