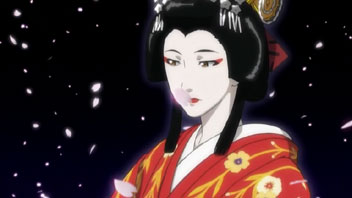 Well… This certainly was a major turning point in the series, one that ties back to Macross Zero as many predicted the series would. When the character list was first posted for Frontier, every fan zeroed in on the name "Sheryl Nome"; what piqued everyone’s interest was the name "Nome" was also used for the two main ingenues in Zero. Was Frontier going to bring Zero into the official canon? Yes, yes it is.

This episode revolves around the filming of Bird Human, a biography of Zero hero Shin Kudo. Through the clever machinations of the plot gods, Alto, Ranka, and Sheryl all find themselves on the set. Cue the romantic tension… Sheryl manages to get Alto’s goat numerous times and by extension stir up Ranka’s emotions. Ranka soon finds her small part changed to major co-star role when the director hears her sing. Alto’s past as a Kabuki princess ropes him into being the stunt double for an underwater scene… A scene where he just so happens to have to kiss Ranka. Cue… Wait, we already cued the romantic tension.

Throw in a life saving appearance by the Red Baron, who finally gets a proper name, and you have one well written episode that serves as a play within the play. The events of the film begin to closely mirror reality as Ranka can completely understand her character’s, Mao’s, feelings of unrequited love. And how well does Zero’s now canonical story fit into Frontier? Quite well I believe. Zero first sent up the idea that the Macross universe might hold organic machines, something Frontier has taken up in the form of the Vajra. I’ll cover the ties a bit more closely in a digression review of Zero.

There is one thing that bothers me about how Zero’s story is presented; I would have presumed the events of Zero would have been heavily classified. How has the tale in its entirety become something the common man can see played out as a film? Does the general populace see it as gross exaggeration making it an effective smoke screen? Whatever the case, the film marks Ranka’s entrance into major stardom. She’s now a household name, and her rivalry with Sheryl will only increase in intensity.

Will Zero’s love triangle be played out once again among Ranka, Sheryl, and Alto? Or will our green-haired reincarnation of Mao carve out a brighter future? I won’t find out soon enough. For those interested, you can check out an excellent comparison of Frontier and Zero’s version of events.