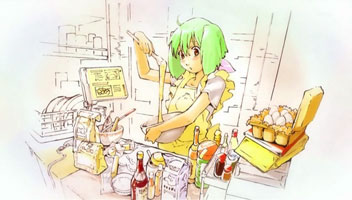 It is a rare pleasure when a book, movie, TV series, etc. completely captivates me; the highest praise I can give a work is to say that I couldn’t put it down or just couldn’t stop watching. Unless it bungles the remainder of its run, Macross Frontier easily lays claim to this praise with its recent five episode story arc. Once I started watching episode 11, I couldn’t stop; each episode had to be watched right then to see what was going to transpire. So, this means one big review for you to chew on. 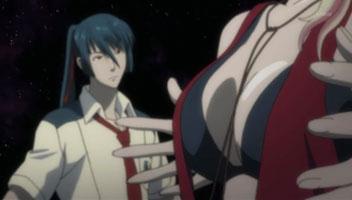 It starts simply, or as simple as a love triangle can be. Alto’s birthday is coming up, and he must choose three options on how to spend it. First, his father has promised to recognize him as his son, if Alto will return to the stage. Next is an offer from Ranka; Ranka’s star is on the rise, and her schedule has been very hectic. However, she wants to meet Alto on the hill on his birthday to give him a present. But it is Sheryl’s offer that sways Alto’s feelings; she offers him the chance to fly in a real sky as her escort to a benefit concert on an actual planet.

This was an excellent, calm character piece before the storm that was to follow. Alto’s decision isn’t surprising; though people tell him he is running away, he feels he is simply looking for the freedom and promise of an open sky, literally and metaphorically. Sheryl’s facade is also starting to crack as she begins to fall for Alto. The writers turn a clever trick with Ranka’s final line of the episode; as she sits alone on the hill, her comment echoes her thoughts on her first attempt at making cookies and her feelings about Alto’s decision.

It would be easy for Frontier to slip into autopilot and simply provide battles full of shiny Valkyrie eye candy, but it recognizes what has made the franchise endure for decades. A good Macross story is about the characters, and Frontier continues to push these characters to make decisions and then accept the consequences. However, this extends only so far; one of the few flaws of the series is the lack of depth for the secondary cast. The writers recognized this and tried their hand at fleshing out Michel’s history, but this seems like a token effort to date. Our story is focused more on fleshing out the characters in the love triangle leaving the rest to help drive the secondary plot thread of the Vajra. 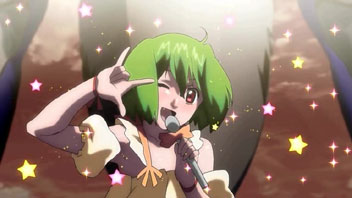 Alto and Sheryl arrive at Gallia-4 but are unaware of the delicate situation there. The Zentradi forces are divided; not all of them wish to live united with the Miclones and adhere to the principles of Quamzin Kravshera. While Sheryl believes she is performing a benefit concert, she has really been called there in the hope that her music can soothe the savage beast. As she walks off the shuttle, she stumbles, overcome by fever and ignites a civil war. She is taken hostage along with Alto and the rest of the crew.

Salvation comes in an unexpected form when Michel arrives with Ranka; her song does indeed tame the savage Zentradi hearts and averts a prolonged and deadly conflict. Michel prepares to take Sheryl home allowing Alto to fly the open skies with Ranka. If you guessed their leisurely flight was interrupted, give yourself a gold flight bar; a mysterious energy pulse grounds Alto’s plane and ends the episode on a cliffhanger.

There were hints in the previous episode that Leon Mishima knew of the potential powder keg and was secretly pushing for its explosion. This episode does nothing to dispel that air of conspiracy surrounding Leon, but we tantalizingly still know little of his true motives or allegiances. At this point, I suspect he is a Micloned Zentradi in disguise.

There also was a swing in the jealousy pendulum as Sheryl is now seeing her star wane while Ranka’s rises. Perhaps it will help her understand Ranka’s feelings in the long term, but in the short term, she is growing frustrated and jealous that her limelight is being stolen by the green haired upstart. What really made the episode work for me was the divisiveness of the Zentradi; a utopia has not emerged between the two species in the decades after the first war. Lurking underneath the surface are the same tensions and ambitions; you can’t change people’s hearts quickly, but a pretty girl and a song can distract them for a bit.

Episode 13 - The past is prologue 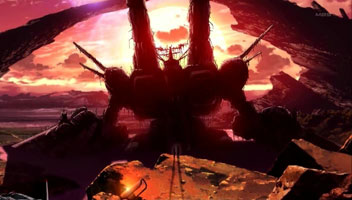 Having walked away from their crash landing, Alto and Ranka walk right into the past when they find the wreckage of a first generation Macross cruiser. This is no ordinary cruiser though; it just so happens to be part of the fleet that was destroyed leaving Ranka as the only(?) survivor. It also happens to be a massive Vajra nest and part of the story’s major conspiracy. Heading up the conspiracy… Grace, Sheryl’s manager; she appears to be the orchestrator of the whole situation. Her goal is to spread hatred, but hatred of what or who is unclear.

Ranka ends up kidnapped and encased in a green egg (no ham though); Alto tries to save her but is thwarted by the Red Baron. Then, everything goes pear shaped; a huge Vajra fleet folds out taking Ranka with them. Alto, Michel, and Sheryl must outrun a bomb set by Grace that is swallowing the entire planet. Cliffhanger!!!!

Not much else to say about this episode; it was the perfect mix of action and plot development. We are given a glimpse into Grace’s purpose and a tantalizing glimpse of Ranka’s past. Even more puzzling is the connection Ranka seems to share with the Vajra mother(ship), and the pain she feels as Alto and the Baron’s fight destroys parts of her. Things were approaching white hot; I couldn’t stop watching now… 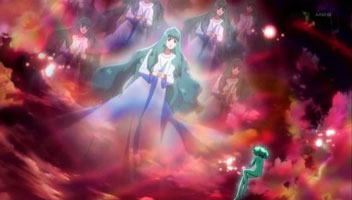 Been craving some frenetic eye candy? This episode has it in spades; remember that Vajra fleet that folded away from Gallia-4? They just appeared in front of and behind the Frontier fleet. A massive battle ensues, but the Frontier ekes out a narrow victory, and Ranka is saved by not Alto but the Red Baron. The Baron goes on to identify himself as Major Brera Starne of the Galaxy Antares Squadron. Hey! Doesn’t anyone other than Alto recognize this guy as the mystery pilot firing on the Frontier’s crew? Yeesh… someone better notice soon, or I’m calling bullshit on the series.

Aside from the amazing battle, the mystery connection between Ranka and the Vajra deepens; she appears to be affected by the harm to the mother(ship) and wants the fighting to stop. The picture is even more clouded by a vision of her mother singing Ranka’s special song to her. 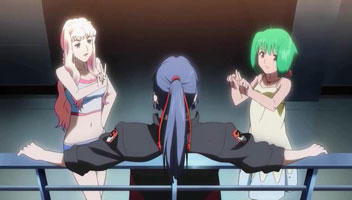 After the white hot battle of the previous episode, it was time to cool things down a bit but keep the plot simmering. Ranka, Alto, and Sheryl are all recuperating and quarantined in the same hospital; cue a musical cat fight for Alto’s affections! Alto should seriously entertain the thought of floating a threesome by those two; he’ll either become the luckiest man in the Frontier universe or quickly solve his girl problems. Fortunately, I don’t have to call bullshit on the series; the Frontier government may not be saying anything (curse your devilish machinations, Leon!), but Ozma and Kathy are highly suspicious of the Major and his motives.

The meat to chew on for this episode is the reappearance of Grace; her memories traveled across the fold space to another body. It isn’t clear yet, but she is either in communication with others or has multiple AIs running around in her cybernetic brain. Which ever it is, these personalities discuss what has transpired. Sheryl was a project to them, a way to bring the Vajra conflict to the Frontier fleet. However, her usefulness has come to an end due to Ranka’s manifestation of her talent and rising stardom. Sheryl, the "Galactic Fairy" (I thought Bobby held that title in this series… ooo… cheap joke… for shame, Luis), is a failure which ensures her a heroic but likely tragic end.

The personalities have identified Ranka as the "Queen" (insert your own cheap Bobby joke here), a prospect that delights them. Toss in references to Sheryl and Ranka’s music becoming part of the fabric of fold space, Alto meeting the head of SMS, and Ranka being assigned by Leon to a special project along with Grace and Brera (little does Ranka or Brera know that Brera is secretly Ranka’s older brother presumed to have died years ago). Now we have an even murkier picture of what is going on here.

But, damn… I am solidly hooked on this series; I have no idea how many episode they have planned, twenty-five I think, but I am torn between my need for more episodes now and my dismay that this series is going to be over far too quickly. 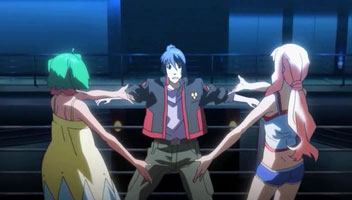