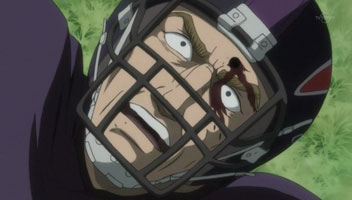 When Duke kills a star quarterback during a game, an aging detective makes it his personal mission to show his old fashioned ways can still deal with a modern day threat. Despite the inevitable, predictable ending, these are the sort of Golgo episodes I tend to enjoy more. Something about Duke having a nemesis trying to bring him to justice just works for me. Perhaps it is the eternal chase between Lupin and Zenigata that has bred this into me. However, I think it is simply the fact that you get to play detective through the character on screen. Rather guessing where he will take his impossible shot, I find it more enjoyable to try figure out how he pulled the job off.

The animation picked up a notch this episode; however, some of the car shots were not seamless. The CG was too apparent but not overly distracting. Golgo 13 remains a fun but disposable series.