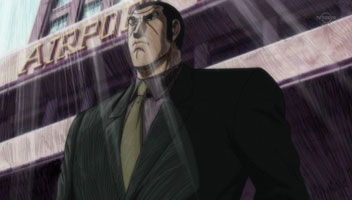 Katz is another in a long line of brash young bucks who believe they have the skills to retire Golgo 13. And this time, there is a chance he could be right. The US State Dept. is flying the special ambassador from Jordan in to testify against illegal activities by the CIA. The ulterior motive is to have funds reallocated from the CIA budget to the State Dept. Rather than defend their actions in Congress, the CIA hire Golgo 13 to assassinate the ambassador on the State Dept.’s watch.

The State Dept. catches wind of this plot and hires Katz to neutralize the threat. Katz quickly shows his worth and uncovers the only two spots Duke can take a shot from during the airport transfer. His analysis seems correct; gun parts are found at the two locations Katz identified. But Duke always takes the impossible shot, and we are given a clue t that spot early in the episode. How he will pull the shot off is the slight tension for the episode.

There is little to comment on about the plot; it is the standard pattern for any Golgo outing. What did strike me was the animation; it appears that the budget may be running a bit thin. The CG was very noticeable at points, and they resorted to the "pastel freeze-frame" a few times. This is the first time I can say that the episode didn’t look slick; hopefully, this was due more to rushing the episode out rather than dwindling budget.