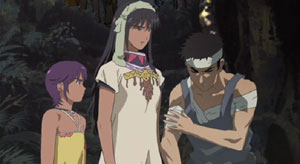 With episode 10 of Macross Frontier tying back into the story of Macross Zero, it was a good excuse to go back and re-watch Zero. When Zero was released, it had its fair share of critics; some disliked the use of CGI for the Valkyries and battle sequences. Others maligned it as a poor derivative of Evangelion or RahXephon. And plenty disliked it simply because they felt the religious and environmental aspects of the plot didn’t fit the established continuity. 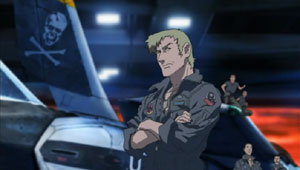 I enjoyed Zero for what it was, an action packed prequel to the original series that added some interesting twists to the mythology. Zero is after sometime after the alien ship that would the SDF-1 crashes. The UN and anti-UN forces are in constant conflict with each side creating new weapons based on the alien technology. Shin Kudo is a UN pilot with a reputation for being a loner; while on a sortie, he is shot down by a mysterious plane that appears to transform into a giant mechanical humanoid. He washes up on the shore of Mayan Island to mixed reactions from the natives. 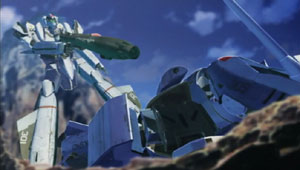 Sara Nome, the tribe’s priestess, wants Shin to leave immediately; his presence will wake the "Bird Man" and bring "Kaduns of destruction" to their tranquil paradise. However, many villagers including her sister Mao welcome Shin warmly and long for less bucolic life. Eventually, a battle rages over Mayan Island and places Shin under the tutelage of Roy Focker and in the cockpit of a Valkyrie transformable fighter. 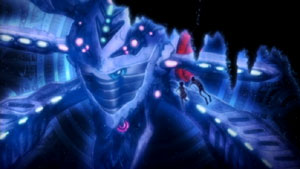 Based on their research of the crashed alien vessel, both the UN and anti-UN forces are searching for alien relics from earth’s pre-history. The remainder of the series focuses on the mystery behind the relics, their ties to Sara and Mao, and the tragic love triangle of Shin, Sara, and Mao. 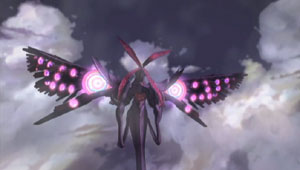 What seemed to make most fans unhappy was the nature of the alien relics; the technology of the original Macross series was very cold and scientific. Zero suddenly introduced the concept that the organic technology of Zero was directly related to the first series technology. However, this is an easy leap for me to make given the fact that the humans and Zentradi were the result of genetic experiments and the fact that technology to manipulate organic matter (miclonization chambers) was available. These same aliens could have at some point dabbled in organic machines and abandoned them over time.

It was not difficult for me to accept this prequel as potential canon material. It didn’t invalidate any of the events that would come after and provided potential wrinkles and possibilities for future efforts. Now, we see the seeds of Zero bearing fruit in Frontier; the Vajra are clearly organic machines but with a seemingly different purpose than the relic found on Earth. I suspect that the ending of Zero will eventually have a major impact on the Frontier universe.

Zero was everything I had hoped it would be; the battles were stunning, and the plot was engrossing. And now, it is a driving influence in the plot of a new series. If you have yet to check out Zero, I highly suggest you ignore the detractors, if any remain, and check it out.