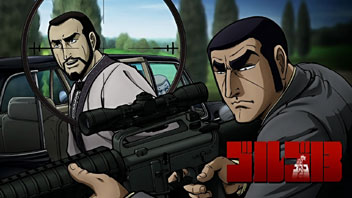 After a lengthy hiatus, we’re skipping ahead three episodes to see what the latest target Golgo 13 is. An agent charged with compiling the medical secrets of powerful people has decided to play every side. He is selling secrets to whoever will pay, and the British government has decided his services should be retired. The catch… they are assigned to protect him until he arrives in Switzerland. Rather than risk sullying their hands, Duke is tasked with somehow breaking through the extensive British security and ensure the medical record on this agent reads DOA.

Unless your brain defaults to "no activity" when Golgo 13 airs, and at this point I wouldn’t blame anyone for doing so, you will figure out within the first five minutes how Duke is going to accomplish his goal. This leaves the twist on what the target really is, but that is also telegraphed numerous times during the episode. Skip this one; you won’t miss much at all.

When are you going to review episodes 16 and 17?

Not sure I will go back and review them; depends on how much farther I stick with the show. They made 50 episodes, and it has yet to really blow me away enough to consider seeing all of them. For now, I'll keep going forward and see how long I last.