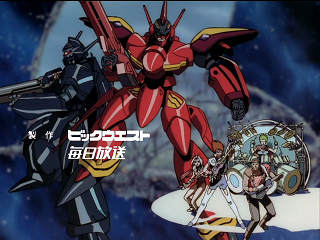 I had planned on writing up a review at the midpoint of the series, but episode twelve of Macross 7 ended on a decent cliffhanger to merit a "quarter way there" review. Over the years, I had read mixed reviews of this particular entry in the Macross universe; no one seemed to particularly like it or hate it. However, I was always curious to see how it would strike me.

Macross 7 picks up decades after the original war with the Zentradi ended; the two races are now hurtling through space in city ships that make the original Macross cruiser look diminutive. City 7 boasts two heroes from the original story; Max is the commander of the military, while Miria is the mayor. However, the focus is on their daughter Mylene and the members of the band Fire Bomber.

The mysterious threat this time is a group of aliens after "Spiritia". This is extracted from life forms via green lasers and leaves the victim alive but unmoving. Combating this threat is Nekki Basara, lead singer of Fire Bomber. He pilots an unusual Valkyrie that shoots speakers into enemy ships. He is looking to harness the power of song to stop all fighting.

I generally gauge how well a series is engaging me by the questions I have between episodes. A good series has me wondering what is around the next turn. Macross 7 has my wondering two things. Will Veffidas ever speak? (Yes, briefly) And will the flower girl ever give her bouquet to Basara? (Not yet, and I’m not ruling out tha the flowers are for someone else in Fire Bomber). There is currently too much repetition in the episodes to really grab my interest.

The enemy appears; Basara flies out and sings the same three songs over and over. Mylene gets annoyed with Basara and his antics. Veffidas drums over everything. What made the original Macross enjoyable was the human story it told in between the battles. They were people trying to live a normal life under highly abnormal circumstances. Macross 7 lacks that touch; they are people waiting for the latest plot device to fly and sing.

There is one interesting plot point that comes close though. Max and Miria’s marriage has come undone. While it is not public yet, they are separated and heading to a divorce. It is intriguing to see this play out, as their jobs require them to work together to protect the people.

There is still plenty of show to watch, and episode twelve did take an interesting turn. We will see if the series can pick up steam and make me care about something other than a taciturn drummer and a bouquet of flowers.

no one seemed to particularly like it or hate it.