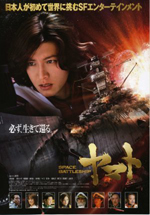 Ah, Star Blazers… You gave me hours of entertainment every morning as a child, and you taught me animation could do more than just portray the rivalries of anthropomorphic animals. It would be many years later before I learned about the source material Space Battleship Yamato. Under any name, I have a nostalgic soft spot for the series and was curious how well the 2010 live-action film would manage to capture the epic story to save planet Earth in just over two hours.

For those unfamiliar with the story (for shame!), the Earth has come under attack by the Gamilas, a mysterious alien race. They bombard the surface, scorching it with radiation and driving humanity underground. The last hope to save Earth is a mysterious message from Iscandar promising a decontamination device and including plans for a warp engine and wave motion gun. The battleship Yamato and its crew launches for one final, desperate mission. The film does an excellent job of setting this premise up while introducing us to the crew of the Yamato.

Once the formalities of introduction are over, the focus is on the battle to get to Iscandar and back in time. There is little room for significant character development, but there are some decent but predictable moments where the characters can assert a unique personality. The special effects for the space battles were better than expected and felt close to recent US television productions. The interior sets though felt too sparse and lifeless; they reminded me of the early ’70s British sci-fi shows rather than a modern production.

Yamato is an entertaining encapsulation of the original story. The space battles are mesmerizing, but there is not much beyond that eye candy that merits a repeat view.