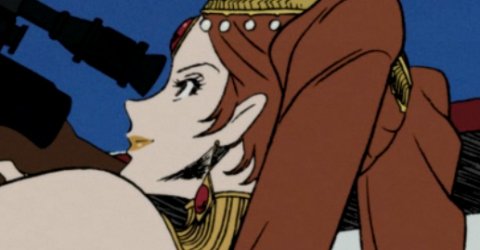 While I have reviewed the individual episodes for FandomPost.com (find them here), I wanted to sit back and reflect on the series as a whole. Lupin fans have for years clamored for the franchise to change, shake up the formula and present something fresh. The Woman Called Mine Fujiko certainly did that, but for many this will be an example of "Be careful what you wish for".

While there was not much press prior to its release, fans were buzzing when a teaser image was released that resembled the artwork of the manga. This image did indeed signify a shift from the art and character style established over the past decades. What the series provides is a gorgeous array of visuals from start to finish. From the sunny coast of an island nation to an eerie ghost town, the colors and backgrounds provide the perfect compliment to the content. And much like the story, you will be revisiting the visuals and finding subtleties, typically the owl motif used throughout. 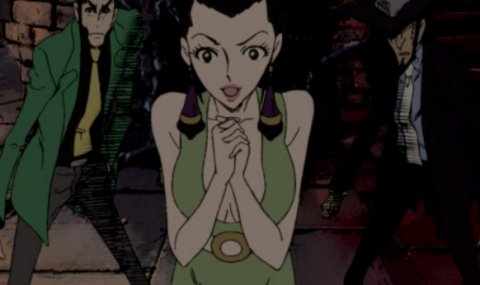 But does it have substance?

Prior to its broadcast, the most we knew about the content of the series was a vague statement that "capture the sensuality present in Monkey Punch’s original Lupin III manga in its daring interpretation of the franchise." Just how daring would they be? Quite daring, as it turned out. Initially, the series is episodic, introducing the cast and how they first encounter Fujiko. However, a small undercurrent is introduced to the plot; vague memories haunt Fujiko, memories of her childhood and a man in an owl mask. This would soon become a flood that engulfed all the characters and rushed us head long into one of the most formidable foes in the franchise’s history. 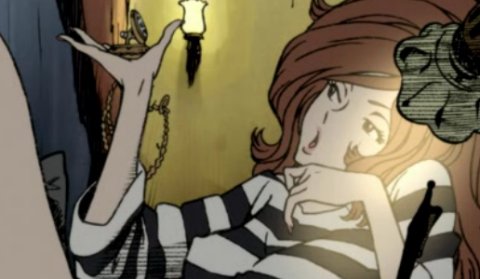 There is some uncomfortable material along the way; the manga had its share of awkward material. However, it was usually played down with a liberal dose of humor. This series eschews this and remains firmly planted in a world that is dark, gritty, and at times horrific. Still, there is plenty of comedy to be found throughout, and the darker elements are not overblown.

What impressed the most was the uncertainty and doubt the story was able to conjure in the mind’s of the viewer. How much of Fujiko’s memories can we trust? How much can any of our characters trust what they see or hear? While most of the final twists are somewhat predictable, the seeds of doubt planted early help the ending retain a few "of course, why didn’t I think of that" moments.

The visuals were not the only elements that returned to their manga roots. With one exception, our gang returns to the balance of ruthless comedy seen in the manga. Fujiko is not just a pretty, manipulative face that loves sparkling treasure. She still loves treasure, is still manipulative, but she is also more than willing and capable of getting her hands, and body if necessary, soiled to get what she wants.

In this series, Lupin is bored and looking for a challenge. Being a master thief has left him with pretty much anything within his reach. Fujiko provides his life with just the spark he was hoping for, and he sets out to steal her away. He’s much more cocky but still gadget savvy. Not quite as lustful as the manga but still working towards unlocking Fujiko’s intimate locks. He holds his information close to the vest and at times rivals Fujiko in his ability to manipulate others to do what he wants.

Of all the cast, Jigen’s back story was my favorite; his soul is weary from being the hired gun to the underworld. Getting involved with Fujiko, Lupin, and thieving provide a new direction for his life. What impressed me the most was the backstory they gave his gun. There is a reason he carries it, a reason that makes his burden heavy. Of all the "origin" stories in this series, this one was by far my favorite. 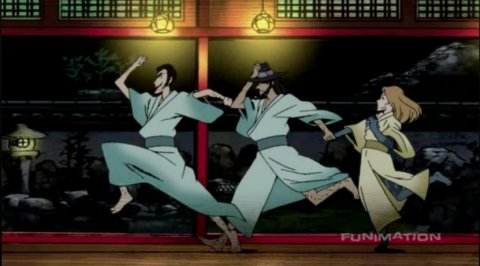 Goemon receives a more balanced treatment; he is looking to make a name for himself in the underworld but still retains a sense of honor that at times runs contrary to this goal. He is also naive and falls into a major crush on Fujiko. Of all the major cast, he receives the least screen time, but his time is used to build a very lovable character.

And we last land on Zenigata, who definitely swings back from bumbling comedy relief to his more hard-boiled detective persona of the manga. However, there is one twist to his character some fans will find unpalatable. While he was willing to kill Lupin in the manga, there was still a moral compass in him that pointed fairly close to true north. In this incarnation, he is as lecherous, if not more in ways, as Lupin could be. He exchanges Fujiko’s freedom for her cooperation in capturing Lupin along with her providing him with sexual favors. And he makes it clear this isn’t the first time he’s cut such a deal with a criminal. It is not the most endearing portrayal of the character, but it suits the world the series builds. No one’s hands are pure white, including our tireless inspector.

Zenigata had a few partners in the manga, and he receives one in this series. Oscar is his young subordinate, eager to please the Inspector. He places Zenigata on a pedestal and aspires to win his love, even if the ends to that goal means betraying the ideals he prizes in his mentor. His arc is a fascinating one but ends on an abrupt and sour note. It feels like they reached the end game of the series and did not have an solid concept of how to resolve Oscar’s thread cleanly. 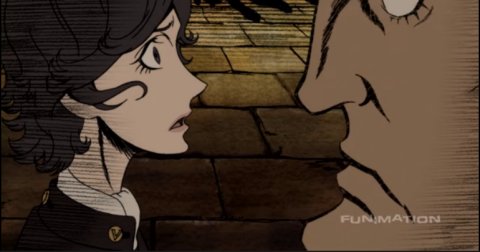 The series I hoped for?

This series was more than I had hoped it would be, more than just a casual shake-up of the franchise. I fell in love with the cast again; they were not quite their manga incarnations, not quite the anime incarnations of the past few decades. A balance was found between the two and resulted in an even stronger cast. Some of my favorite series in recent memory have managed to balance being episodic but with a overarching plot also playing out. Fujiko manages to do so, though not nearly as well at times. There were spots where the episodes seemed out of rhythm with the rest, but these were few leaving the bulk of the series to weave an intricate story.

And the villain… spectacular; the gang has faced some formidable foes, but this one felt like it held actual danger for them. One wrong move, and they might not survive despite their clever gadgets, marksmanship, or swordsmanship. The villain weaved as an elaborate a plot to achieve his ends, as Lupin would to steal away a world renowned treasure in a spectacular manner. 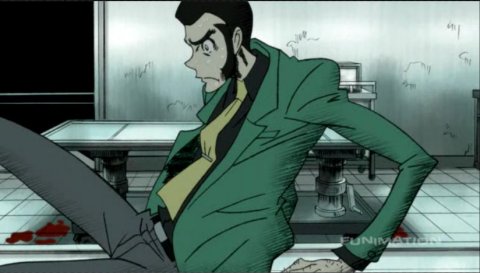 Everything about Fujiko felt like the right steps to shake the franchise out of its malaise and break away from the formula it has followed for decades. Much like Frank Miller’s The Dark Knight Returns returned the franchise to its noir-ish roots but with a modern twist, Fujiko finds a good balance between rediscovering its manga roots while keeping some of the fun of its animated past. While not a perfect series, it far exceeded my expectations and revitalized my love for the franchise. Here’s to hoping they make more like this. 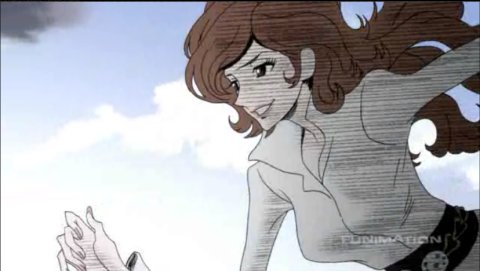