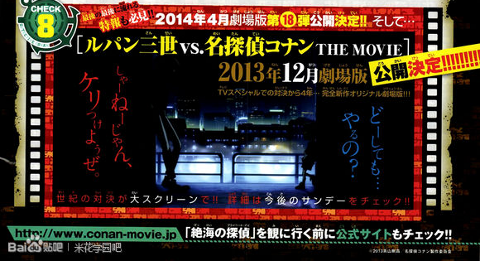 Prior to the official release of the April 21st issue of Shonen Sunday, the Lupin forums were buzzing with a leaked announcement of a new Lupin/Detective Conan cross-over that would hit theaters December 2013. The leak eventually was confirmed as accurate marking the first time in seventeen years that the Lupin gang would grace the big screen. My initial reaction was less than enthusiastic. 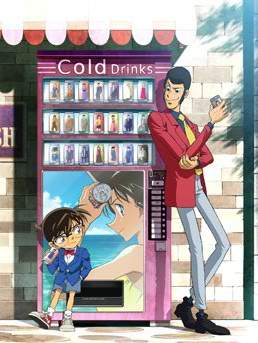 The first attempt at a cross-over between these two franchises was a TV special in 2009. Here was an opportunity to have a master thief pits his skills against the superior intellect of a master detective. What the special delivered was a variation of The Prince and the Pauper that showcased the Conan characters, had some brief moments with the Lupin gang, but failed to deliver on the "versus" portion of the title. It was nearly an hour before Lupin and Conan even cross paths, and their overall involvement with each other is confined to the end game where they manage to help solve the mystery together. It was a solid and entertaining story, but it just did not come close to satisfying what the title "versus" conjures in the mind.

So, round two of this crossover will be upon us at the end of the year. Will we see more of the same just on a larger screen? Or will they actually pit the two iconic characters against each other? Information is sparse currently, but hopefully details will be revealed over the next few months.

Well, I imagine they’d put more effort into a big-screen Lupin vs. Conan, since people actually have to pay to see it, instead of just watching it on tv. And they don’t want people from both fanbases to feel ripped.

More effort in the production side I can believe; whether they put more effort into an engaging story that actually pits the two against each other… Well, I’m setting the bar low on that one…