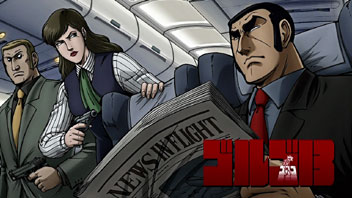 Ah, sweet irony… Not two episodes ago, Duke Togo was hijacking a plane; now, episode twenty-three finds him aboard a hijacked plane. Four criminals hijack a plane inbound to Heathrow and demand a large sum of money. The government gives in to their demands but manages to slip a coded message to Golgo 13 asking for his services in recovering the plane. One interesting point here is if the government even needed to do this. Duke was likely aware that the hijackers would blow up the plane at some point; was he planning to escape on his own before that? Or would he have rescued the entire plane only because it served his needs. This was a decent episode though I am hoping they will not beat the hijacked plane plot into the ground.